Josh was saved when he was 5 years old, but he never did get baptized. I did not want to push him and make him feel uncomfortable. The last day of school Josh tells me..."I talked to Pastor and I am getting baptized June 2nd". I was so excited for him. 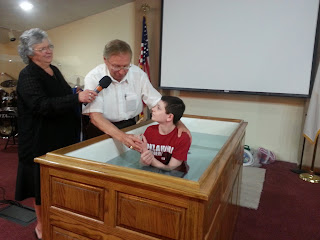 Here is a picture. The rest are on facebook. I am glad I never pushed him to get baptized and that it was able to be his decision. It just means more that way. I cried and was so proud of him. The Grandparents were there and one of Josh's Aunt's...Karl's sister Kayla. Afterwards we went to Pizza Hut to eat. It was a nice night. My parents also had their 50th wedding anniversary in April. We have been busy. We took them out to eat and had a great time with them. I did not get any great pictures of that because my dad is having trouble walking (his weight) and so he was off to the car before I could even snap a picture. He is suffering from Alzheimer's now and my mom has Parkinson's. They are doing ok for what they are going through for now. So yesterday Josh and I decided to go to the Japanese Stroll Garden here in Springfield. We went there and then we had a bite to eat at Burger King. Last night we went to Branson for dogfood at Petco and I got to check-out the new Ulta make-up store. We had fun. The stroll garden was so peaceful and pretty. It is in a big park, so we went there also and saw the Botanical Gardens and the Butterfly House. My phone died at the Japanese Garden I took so many pictures, so I did not get any pictures of the Botanical Garden or the Butterfly House. Josh did, but I haven't seen them yet. Here is a photo of Josh at the Japanese Stroll Garden. 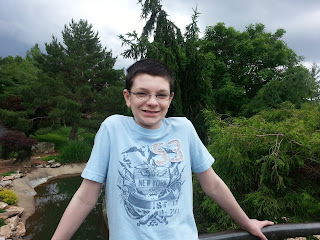 I think I am caught up on the important stuff now. Tomorrow we plan to go to Silver Dollar City...a theme park here in the area, so I will make a post about that on Monday. Have a great weekend!!