Saturday 9 - Why Did I Choose You?

Why Did I Choose You? 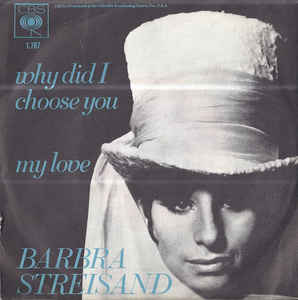 1) In this song, Barbra Streisand reassures her lover that, if she had it all to do again, she would still choose him. Tell us about a decision you've made that you never, ever regretted.  Deciding to go back to school to get my teaching certificate.  My original degree is Sociology/Psychology.  I was going to do social work originally and was offered a position working for the department of mental health, but at the same time I was offered a teaching position and they would pay  me teacher salary as long as I was in school. I decided that teaching would give me a closer schedule to Josh.  I would have been driving a lot for social work.
2) The music was composed by Michael Leonard, who studied classical music at Julliard and the Handel Conservatory of Music in Munich. Do you often listen to classical music?  no, but only because there are no stations here that play classical.  There used to be and I listened then.
3) The lyrics were written by Herbert Martin. He taught music in the NYC public school system and during the summer worked in summer stock. That's how he met and began collaborating with Michael Leonard. Tell us how you met someone important in your life.  I met my husband at church.  We were singing in the church choir and we had mutual friends.  We all would go out to eat after church and after a bit Karl asked me out.
4) Ms. Streisand was a very good student, graduating fourth in her class at Erasmus Hall High School when she was only 16. One of Barbra's classmates was Neil Diamond. Do you have a favorite Neil Diamond song?  I love Neil Diamond,  but I am going to say Sweet Caroline because I have a former student that would sing that song and had all of the class singing it.  It has great memories attached to it.

5) While she didn't go on to college, she continued her education by attending two different acting schools simultaneously. Did you enjoy being a student?  Yes and I would still love being a student, but it is so expensive.
6) Barbra and her first husband, Elliott Gould, shared a New York apartment over a 5th Avenue restaurant called Oscar's Salt of the Sea. Elliott originated the role of Trapper John in the movie M*A*S*H. On TV, the role of Trapper was played by Wayne Rogers. Can you think of another role that's been played by more than one actor?  Magnum P.I.
7) Oscar's Salt of the Sea has ties to Sesame Street. Jim Henson loved their food and was amused by how inhospitable the owner, Oscar, could be. That's how Oscar the Grouch got his name. Which is your favorite Muppet? Elmo.
8) Back to Barbra ... She is a successful recording artist (nominated for 45 Grammy awards, winning 8) and an Oscar-winning actress, but she's suffered career disappointments, too. In 2010, she read the book Hidden Figures and tried to buy the rights so she could direct the film version. She lost out to fellow Brooklynite, director Theodore Melfi. In 2016, his movie of Hidden Figures was released. Did you see the movie or read the book?  I saw the movie.  It is excellent.

9) Random question: Your best friend takes up painting and proudly presents her first framed work to you. You think it's atrocious. Would you hang it in your home anyway?  I probably would and I would probably love it because it was from and by my friend.  I doubt I would think anything from a friend was atrocious.