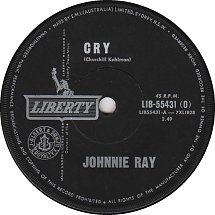 1) In this song, Johnnie Ray assures us we'll feel better if we cry. Do you agree?  I totally agree.  Sometimes it is good to just release emotions.  It makes me feel better anyway.

2) He also mentions waking from a dream, believing it was real. Has that ever happened to you?  Yes, but not very often.

3) Because this record was such a massive hit, Johnnie Ray was nicknamed "The Prince of Wails." Without looking it up, do you know who is currently the Prince of Wales?  I believe it is still Prince Charles.
4) To cash in on the success of this single, 20th Century Fox cast Johnnie Ray in a big-budget musical, There's No Business Like Show Business. Today it's best remembered as a Marilyn Monroe movie. Have you seen many of Marilyn's films?  I have seen a few.

5) After graduating from high school, Johnnie worked at low-paying jobs, including bus boy and soda jerk. He found he made better tips when he began playing piano in restaurants. Have you ever worked for tips?  no

6) In 1969, Johnnie was in the news a lot again because he performed with Judy Garland during her European tour and was best man at her wedding to Mickey Deans. Tell us what you wore to the most recent wedding you attended.  My nephew got married almost two years ago now and I wanted to get a new outfit.  I got a Genie jumpsuit with black heels and new jewelry and had my nails done.  We got to the wedding and there were people there in shorts.  So much for trying to look nice.  It is a nice outfit to have though.  It is something I can wear at Open House or Parent/Teacher conferences.  This one is similar. 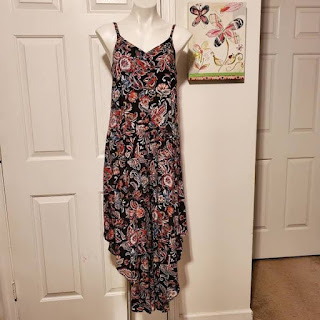 7) In 1952, when this song was a hit, Mr. Potato Head made his debut. It was the first toy advertised on television. What TV commercial have you seen recently?  I just saw a commercial for New Amsterdam, which is one of my favorite tv shows starting back up March 2nd.  I am excited.
8) Also in 1952, chlorophyll was all the rage for banishing bad breath. Colgate led the way by adding it to their toothpaste. Do you use gum, mints, mouthwash, or breath strips?  gum or mints

9) Random question -- Congratulations! You won a free three night/two day weekend for two in Las Vegas! The weather is predicted to be sunny and 65º each day you're there. It's 12:00 noon on your first day. Are we most likely to find you: a) gambling in the casino or b) having breakfast in bed or c) outside, enjoying the sun and the sights?  I would be (C)...outside enjoying the sun and sights.