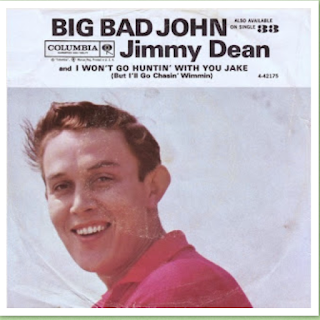 August will be devoted to story songs. Here's the first:
Big, Bad John (1961)
Unfamiliar with this week's tune? Hear it here.
1) This song tells the story of a stern, enigmatic miner. None of the other miners knew much about him. When people first meet you, do you think they see you more as mysterious or straightforward?  I feel like I am straightforward, but I really do not know how people see me.
2) During a serious accident, many of the miners panicked. But not John. Think of your family, friends and acquaintances. Who would be the most dependable in a crisis?  My in-laws are very dependable.  When my dad was alive, he was too.
3) His heroism allowed 20 miners to escape, but cost John his life. According to the lyrics, there's a marble slab on site of mine that honors him. Is there a memorial to a local hero in your town?  no
4) This song was written and performed by Jimmy Dean. He began composing it on a flight from New York to Nashville. How do you amuse yourself while traveling?  In the past it was by listening to the radio and visiting with my husband Karl, but now I might listen to an audiobook.
5) Jimmy Dean hosted a long-running variety show on CBS, which is best-remembered today for introducing Jim Henson's puppets -- especially Rowlf, a dog who sang and told jokes. While Rowlf didn't make it to Sesame Street, he was a recurring character on the Muppet Show. Are you a Muppet fan?  Yes, they were really popular when I was a kid.
6) Jimmy found success in business with The Jimmy Dean Sausage Company. He sold the company to Sara Lee in 1984 for $80 million. Today Jimmy Dean breakfast products are still popular in grocery stores all over the country. What's your favorite breakfast?  Eggs, bacon, toast and hashbrowns.
7) In 1961, when this song was popular, Vogue asked if fashion sense is inborn or if a woman could learn to be chic. What do you think? Do you think style is either something you have, or you don't?  I think people have an "eye" for what they like.  Maybe it isn't fashionable, but people need to be comfortable.
8) Also in 1961, Ernest Hemingway took his own life. Did you read Hemingway in English class? Can you recall any other novels you read for school?  I am not sure that I have read any Hemingway, but Josh is getting a book by Hemingway for his birthday which was the 4th.  He turned 24.  I read The Great Gatsby, Tom Sawyer and Huckleberry Finn, The Grapes of Wrath, The Scarlett Letter and many others.
9) Random question: Think about the last "white lie" you told. Was it to make your own day easier or spare someone's feelings?  To spare someone's feelings.