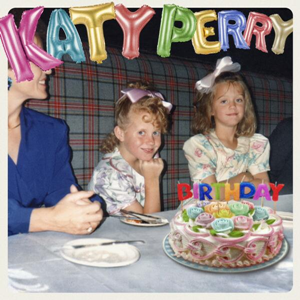 1) In this song, Katy Perry sings that she wants to give her lover something good to celebrate every day. What is making you happy this fine Saturday?  It is going to be a nice warm weekend, so I am excited about that.  Sunny and near 70º F.

2) The video is all about baking a birthday cake. When did you most recently enjoy something home baked? Were you the baker?  My co-worker Tina is always baking me something and bringing it to school.  She is so sweet.

3) Tell us a memory from one of your birthdays.  My 21st birthday.  I was in college and my roommates decided to throw me a birthday party.  We drank some beer.  My roommate got so drunk I found her in a closet all by herself in the dark.  I went out to the sand volleyball court and played volleyball with some friends that were at the party toward the end of the evening....so we were playing in the dark.  I went back to my apartment and had sand all over the bathroom from my shoes and clothes.  It was crazy and I do not do stuff like that anymore, but it was fun at the time.

4) This week's song shares nothing but the title with a Beatles song. (Here's a video of Paul McCartney performing it live.) Can you think of another title that's been used by more than one song?  Nothing is really coming to mind.

5) Similarly, this week's featured artist was born Kathryn Hudson and called Katy Hudson until she changed her name to Katy Perry to avoid confusion with the actress Kate Hudson. Have you ever met anyone else with your same name?  no not in person, but I have seen some people on facebook with my name.  Of course, I have met many people with my first name.
6) Katy and actor Orlando Bloom became parents to a baby girl in 2020. Bloom is best known for his work in the Lord of the Rings and Pirates of the Caribbean movies. Are you a fan of either of those film series?  I love both and love him as an actor.
7) In 2014, the year this song was popular, Prince William toured the United States and attended his first NBA game (Nets vs. Cavaliers). What's the most recent sporting event that you watched?  Last weekend I watched a Spring Training game of the St. Louis Cardinals.  It was good to see them again.
8) Also in 2014, Joan Rivers died. While best-known for making us laugh, she was a very successful entrepreneur, selling jewelry on QVC. Have you ever ordered anything from TV?  No, but my mom does all of the time.  She picks up some neat stuff.
9) Random question -- Have you ever been told you talk too much?  Goodness no.  I am kind of quiet.