Saturday 9- Fooled by a Feeling

Fooled by a Feeling 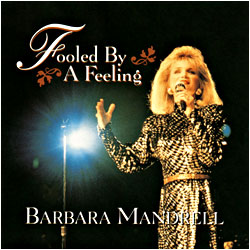 Saturday 9: Fooled by a Feeling (1979)
Unfamiliar with this week's tune? Hear it here.
Chosen because next week is April Fool's Day.

1) Some believe that the practice of playing tricks on one another on April 1 dates back to the 14th century because it's mentioned in Chaucer's The Canterbury Tales. Geoffrey Chaucer is considered one of England's greatest poets. From memory, quote a bit of poetry for us. (It doesn't have to be English, or great.)  Rose are red, violets are blue, sugar is sweet and so are you.  *sorry, nothing was coming to mind.

2) When Crazy Sam was a little girl, her mother would prank her on April Fool's Day by slipping a rubber worm or plastic spider in her lunch box. Did you/do you carry a lunchbox, either as a student or an adult?  I carry a lunch box to school every day now as an educator, when I was a kid, not as much.  I did from time to time though.

3) In 1998, Burger King got into the April Fool's Day fun by promoting a special "Left Handed Whopper," supposedly designed to perfect for a leftie to hold. Describe your perfect burger.  It would be a burger from a restaurant, medium well with ketchup, mayonnaise and mustard on in.  I actually order burgers with everything and take off what I do not want.  I like the essence/flavor of all of it, but I do not necessarily want to eat everything.

4) In this week's song, Barbara Mandrell sings that she followed her heart into her lover's arms. Are you more often led by your heart or head?  It depends.  I am going to say my head though.  I feel like at my age I should know better.

5) She knows now she was wrong for believing her man loved her. When did you recently admit you were wrong?  Oh geez, I do not keep track of wrongs and rights, but when I am wrong I say so.

6) Barbara Mandrell recalls being able to read music before she could read words. Can you read sheet music?  Not really.  I tried to watch the notes move when I was in choir, but no, I can't read music.

7) Barbara had her own TV variety show in the 1980s and, in the 90s, acted on the daytime drama, Sunset Beach. The soap opera's producer, Aaron Spelling, was a huge fan of Barbara's and was thrilled to finally meet and work with her. Tell us about someone you really enjoyed working with, and why.  I think my favorite co-worker is Lori...she is/was a Pastor's wife...her husband died this year from covid.  She is the most positive person I have ever met.  She never has a bad thing to say about anyone...and I mean never.  I was around her a lot.  I enjoyed being around her type of personality.  I feel like people like her make everyone else better.  She lifts you up and just takes glory in everything around.  I missed working with her this year...I was at the elementary this year instead of the primary school because of covid.  This picture was taken on a Dr. Seuss crazy hair day. 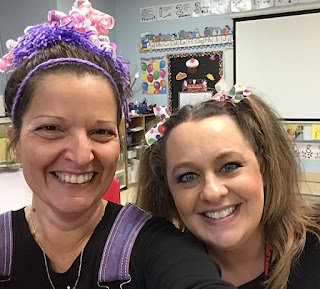 9) Random question: What's the first thing you thought of when you woke up this morning?  I think I always think...why is it time to get up already?  Hee, hee