Saturday 9: River of No Return

River of No Return 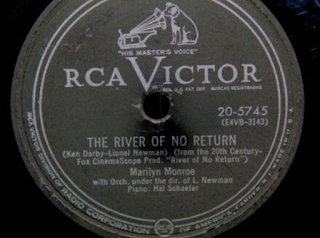 Saturday 9: River of No Return (1954)
Unfamiliar with this week's tune? Hear it here.

1) Marilyn Monroe performed this song in the 1954 western, River of No Return. In the movie (and at the beginning of this clip) she wears jeans. The wardrobe mistress bought the jeans off the rack at JC Penney's. Yet because of their connection to Marilyn, they are valuable memorabilia. Designer Tommy Hilfiger bought them for a reported $75,000 and today they hang in the closet of Britney Spears. Do you ever shop at thrift stores or websites for second-hand or vintage clothes?  No, not really.  I did find a secondhand store near my house that had upscale clothes for a lesser price, but I think they closed.  I need to look into that.  I loved shopping there for myself and they had a different one next door for younger people and I liked getting Josh some clothes there.  Same thing, all designer clothing.
2) In this song, she sounds melancholy as she recalls a lover who has gone. We hope this morning you're feeling more chipper than Marilyn. In one word, describe your mood.  I am feeling anxious.  I am writing this on Thursday night and I have pre-K Graduation tomorrow night.  I just want it to be a really nice night for the families.
3) In real life, Marilyn's love life was sailing along. During the filming of this movie, her famous boyfriend, Joe DiMaggio, visited her on location in Canada and they were married by the time the movie was released. Joltin' Joe was of course one of baseball's greats. How is your baseball team doing this season?  The St. Louis Cardinals are in second in their division, so that is pretty good, but they just make me nervous.  I am enjoying watching Yadi, Wainwright and Pujols a lot though.
4) It was during her romance with Joe that Marilyn learned to cook. She enjoyed preparing Thanksgiving stuffing from scratch. Do you have a favorite recipe to share?  I do not really use many recipes.  The foods I make, I have made so often, that I do not follow a recipe.
5) Over her lifetime, Marilyn had 43 different addresses. She was always a renter until February 1962, when she bought her final home in Brentwood. If you're a renter, do you ever wish you owned? If you're an owner, do you ever think you'd be happier as a renter?  I rented when I was young and in college, but I am much happier as an owner.
6) Marilyn tended to her famous alabaster complexion with Nivea, which is still available at drugstores today. What's the last thing you purchased at a drugstore? Was it medication? Food or snacks? Health and beauty? Something else?  It was medication
7) Her signature scent was Chanel No. 5. What fragrance do you wear most often?  I am not a fan of perfume.  The smell of it changes as soon as it hits my skin.  I wear Victoria's Secret Pure Seduction lotion.
8) The year Marilyn's recording was released, John Travolta was born. What's your favorite John Travolta movie?  John Travolta is not a favorite actor of mine, so I will just go with Grease.  I do love him in that movie.
9) Random question: What happened to your first car? (Sold? Traded in? Still in your garage?)  It broke down when I was in college and we traded it for a different car for me.  My dad traded it.  I had no clue.