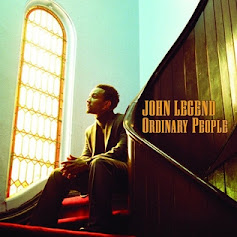 Unfamiliar with this week's tune? Hear it here.
1) In this song, John Legend sings that both he and his girl have "room to grow." What about you? In what areas would you like to improve?  Maybe working out more and eating better.

2) He sings that when he hangs up in anger, she calls him back. Are you quicker to anger, or quicker to forgive?  Quicker to forgive.  I have been quick to anger though and I learned it doesn't really get me anywhere, so I just forgive and move on.
3) "Ordinary People" was John Legend's first big hit. He originally wrote it for The Black Eyed Peas, but -- happily for him -- recorded it himself. Have you ever purchased a gift for someone else but then decided to keep it yourself?
I don't think so.
4) Ordinary People is also the title of an acclaimed novel by Judith Guest and an Oscar-winning film. Are you familiar with either the movie or the book?
I don't think so, but I looked up the movie and it looks good.
5) John is married to Chrissy Teigen, who gained fame as a Sports Illustrated swimsuit model. When is the last time you dove in? Were you in a pool, lake, river or sea?  Pool
6) John unexpectedly proposed to Chrissy on vacation, but he was afraid airport security would ruin the surprise when they went through his carry on very thoroughly. He worried she would see the ring box and he'd have to drop down to one knee right there at the airport! Tell us about one of your flights: your first, your most recent or your most memorable.  I have never flown.

7) John is currently a coach on The Voice. The other coaches are Nick Jonas, Kelly Clarkson and Blake Shelton. Of those four singers, which is your favorite?   I like the music from the Jonas Brothers, so I will say Nick Jonas.

8) In 2005, when this song was popular, Johnny Carson died. After he retired from The Tonight Show in 1993, he traveled extensively and discovered he especially enjoyed photographic safaris in Africa. If time and money were no object, where would you go on vacation?  I would plan to travel all over, but I might hit a beach first.  Maybe a trip to Hawaii.
9) Random question -- In your typical day, what's the longest you usually go without saying a word to another person: all day, a few hours, an hour, or five minutes?  Probably like 5 minutes working at a school, it is not possible to just be quiet.