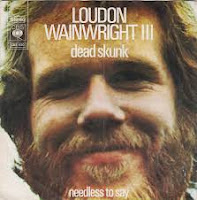 1) This song is about a poor dead skunk that stinks "to high heaven." Have you ever experienced the spray from a skunk?  My dogs have gotten close to a skunk, I do not think they were actually sprayed, but I think they rolled on a dead one.  They smelled bad, but I think it would have been so much worse if they were sprayed.  That is my only experience though.  I haven't been sprayed.

2) Dennis Oliver, a disc jockey in Quincy, IL, played this song every night at 9:00 PM for decades. The only thing that got him to stop was being moved to the morning slot. What song do you never tire of?  I never tire of music from the 80's.  Lots of songs.  BTW...my college roommate Julie was from and moved back to Quincy, IL.  I was in her wedding.  Love that town!

3) At Georgia Tech's Russ Chandler Stadium, the fans sing this during the 7th inning stretch of their baseball games. Do you know the lyrics of the more conventional 7th inning choice, "Take Me Out to the Ballgame?"  Of course...Gal, it goes Let us root, root, root for the CARDINALS...hahahahaha.  That is how I sing that part of the song, but yes, I do know the lyrics.  Gal will say CUBBIES. ;)  The actual words...home team.

4) This week's featured artist, Loudon Wainwright III, can play many instruments, but is said to enjoy banjo and ukulele best. If you could magically become proficient on any instrument right now, which would you choose, and why?  Piano, I love the way a piano sounds and all of the different music you can play.  I think for my job though, I wish I could play guitar...because I could play it and sing to the kids instead of playing music on YouTube.

5) He appeared as Capt. Spalding on several episodes of M*A*S*H in the 1970s. If you could transport yourself into the world of your favorite TV show, which would you choose?  I never have had the thought of wanting to live in a place I see on tv.  I am content where I am.  I could live in the south though.  Probably the best place I have read about was set in Alabama.  It was one of Fannie Flagg's books.  I enjoy her books set in Missouri too...which is where I live.
6) Loudon's mother was a yoga instructor. What did you most recently do for exercise?  I took Josh and my mom shopping at the mall (we were masked).  Josh's birthday is coming up, so we got him some things.  He needed some shoes, so I wanted him to try them on.  We walked the mall.  I walked everyday last year on my treadmill during quarantine.  I stopped when I went back to school.
7) He went to St. Andrew's School in Delaware, where the movie Dead Poet's Society, starring Robin Williams, was filmed. When you think of Robin Williams, do you recall his dramatic movie roles, his funny movies, his comedy routines, or Mork from Ork?  I think of him as a funny man.  I see him as Mrs. Doubtfire.  He was wonderful.  I loved his serious roles too.  Dead Poets Society is so good.  He was so good.  He is missed.
8) In 1973, when this song was popular, Norman Mailer created a great deal of buzz with his book about Marilyn Monroe. Do you read many biographies and memoirs? Or do you prefer to read fiction?  I prefer to read fiction, but on occasion I will pick up a memoir.

9) Random question: You're on the road, traveling through a town you've never been in before, and ready to stop for a quick bite. On one side of the street is a cute little diner called Mom's. On the other side is McDonald's. Which do you choose?  I like to try new things, so I would go with Mom's.  I suppose if I didn't like it I could always run over to McDonald's.