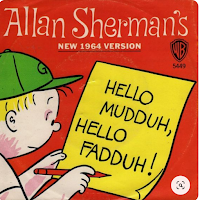 1) TV writer Allan Sherman based this song on his own son's letters of complaint from camp. Did you go away to summer camp?  No, I never did.  I always wanted to though.

2) Our camper is afraid of both bears and alligators. What animal scares you?  I am scared of mice and snakes.  I probably should be more scared of bigger animals, but I never see them up close.

3) One of his fellow campers developed poison ivy rash. Have you ever experienced redness and itching caused by poison ivy or poison sumac?  Oh yes, both.  I am very allergic.  I end up at the doctor's office to get medicine.

4) Early in his career, Allan Sherman created the game show I've Got a Secret, which became a big hit. What's your all-time favorite TV game show?  I guess The Price is Right.  I watched it all of the time when Bob Barker was host.
5) In 1959 he moved from New York to Hollywood, where he transitioned from writing to performing almost by accident. As a lark, he entertained at the parties of his next-door neighbor, Harpo Marx. A recording company executive heard him and offered him a contract. Tell us about the last party you attended.  Do you remember me telling you about my co-worker Lori and how her husband died from Covid in November?  Well, she is getting re-married.  I was shocked, but I am so glad she has found happiness again.  She is getting married August 8th, so I was at her Bridal shower.  Here is a picture of myself, Lori and Kris from left to right. 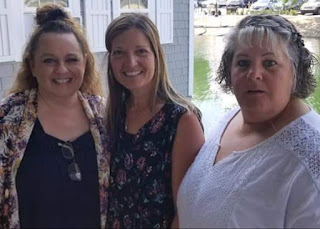 6) Allan Sherman got unexpected press attention and a boost in record sales when it was discovered that President John F. Kennedy was a fan. What's something you purchased because of a recommendation from someone else (friend, relative, celebrity endorsement ...)?  I bought a bra based on a recommendation from a blogging friend.  I LOVE it.
7) In 1963, the year "Hello Mudduh, Hello Fadduh" was popular, Studebaker stopped producing cars in the United States. What was your family car when you were growing up?  We had a Ford Fairmont for a while.  It ended up being my first car.

8) Also in 1963, Vogue magazine did a cover story on how make wearing white "new and exciting." What color do you look best in? Is it the color you wear most often?  I look best in pastels, but no I mostly wear black or dark colors.

9) Random question: Have you ever gone on to have a platonic relationship with a former lover?  no.  I am facebook friends with a few ex boyfriends, but for the most part we do not keep in tough at all.