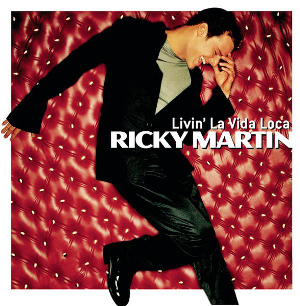 1) Ricky Martin sings that he and the girl dance in the rain. Do you feel like dancing this morning?  I never feel like dancing in the mornings.  I am so sleepy when I wake up.  Now give me a couple of hours and I will dance.

2) The lyrics tell us the girl prefers champagne. When did you last enjoy a glass of the bubbly?  It has been a very long time.  Probably 30 years.
3) When Ricky first heard "Livin' La Vida Loca," he imagined  the subject of the song was a "Bond girl," the glamorous love interest of James Bond in the movies. Since 1962, there have been more than 20 Bond films. Have you seen any/many of them? Do you have a favorite Bond?  My husband loves them, but I do not care anything about them, so no favorite Bond.
4) Ricky tells interviewers that when he was very young, he'd sing in the family kitchen, pretending a wooden spoon was his microphone. Crazy Sam admits to lip synching into a black Magic Marker. When you gave imaginary concerts, what did you use as a microphone?  I used my hairbrush.  I love singing.

5) Ricky began working at the tender age of 9, performing in commercials. How old were you when you received your first paycheck?  15

6) Ricky does yoga to stay in shape. Have you ever tried yoga?  no, just a yoga pose here and there.

7) Ricky is of primarily Spanish descent, with a little French mixed in. When you think of French cuisine, what comes to mind?  desserts, I studied French, but I never did go to a French restaurant.  I thought that would have been such a fun field trip for our French classes, but we never went.  Probably too expensive...I really have no idea.
8) Ricky once had his own restaurant, Casa Salsa, in Miami Beach. Have you ever worked in food service?  I worked at McDonalds when I was in high school.
9) Random question: What is your best quality?  I am a good listener and encourager.