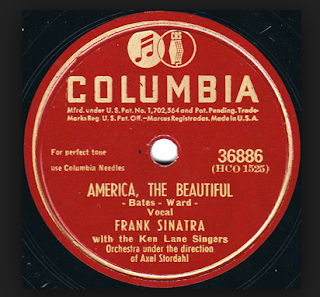 Unfamiliar with Frank Sinatra's 1945 version of this song? Hear it here.

1) In 2016, a group recommended that this week's song replace "The Star Spangled Banner" as our national anthem. They maintain it's just as beautiful but easier to sing. How do you feel about this?   I am against changing it.   Truth is, I do not want a national anthem that talks about how pretty our county is, I want one that talks about how we became independent and that is from our veterans that fought for us.  It should reflect such.  There is so much history in that song.  The people that died so we could be free, they were real.  We can't forget them and this song is a reminder of that.

2) Katharine L. Bates said her lyrics were inspired by a trip to Pike's Peak. What's the most beautiful American spot you've ever visited?  The first time I saw the Rocky Mountains, I actually cried I thought they were so beautiful.  I know that is weird, but I take in nature that way.

3) The music was written by organist Samuel Augustus Ward. Both Bates and Ward were very formal when signing their names professionally -- she including her middle initial and he with his full middle name. How about you? When you sign checks or documents, do you use your middle name or initial?  Mostly just initial, but there have been times when I have signed my whole middle name too.

4) In 1945, when this version of the song was recorded, America lost Franklin Delano Roosevelt and Frank Sinatra said, "I lost a hero." What late, great American hero from our past would you like to honor today?  JFK

5) Also in 1945, a 19-year-old "hoofer" waited outside the Los Angeles radio station where Sinatra was being interviewed. That was the beginning of the friendship between Sammy Davis, Jr., and Frank Sinatra. Tell us about your oldest friend.  I really do not like to give long answers on these, but my oldest friend would be Barb.  We went to school together.  We had so much fun together.  We drove around as teenagers, we worked at the same place.  Just good times.  She does not live far from me now and we get together every now and then,  but we need to get together again soon.

6) The Fourth of July means we're in the middle of summer. Are you careful about applying sunscreen?  YES!  Especially to my face, I apply a stronger SPF to my face.

7) Mosquito bites can be a major summer annoyance. Are you scratching any itches right now?  Yes, and I hate them.


8) Emergency rooms report an increase in wrist injuries in summer, with people falling off bikes and skateboards and jamming their wrists catching hard-hit softballs. Have you  been to the ER or Urgent Care during 2019?  I went at the end of 2018 in December...I had a sinus infection.  I haven't been back since in 2019.

9) New York is home to Nathan's Hot Dog Eating Contest every year on the 4th. Will hot dogs be consumed in your household this weekend?  I had some Nathan's hotdogs on the 4th of July.  We had hamburgers, hotdogs, chips and dip and chips and salsa, watermelon and ice cream.  We watched the fireworks in our gazebo in our yard.  Fun day!