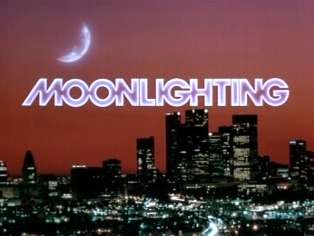 1) Moonlighting was an award-winning comedy-drama that ran from 1985 to 1989. Are you familiar with the show? Were you a fan?  I have never seen it.  I was in high school, so I was working or out with friends probably.
2) The series revolved around The Blue Moon Detective Agency in Los Angeles. There have been countless TV shows and movies about detectives and their cases, yet Crazy Sam doesn't know anyone who has ever hired a private investigator. How about you? Have you ever had anything or anyone investigated?  no, but I have plenty of friends that think they are private investigators...hahahaha.

3) The agency was named Blue Moon because one of the owners, Maddie Hayes, was a model known as The Blue Moon Girl, famous for promoting Blue Moon Shampoo. If we were to rename their detective agency based on the shampoo you most recently used, what would it be called?  The Matrix Biolage

4) Cybill Shepherd played Maddie Hayes. Cybill believes we can all find romance many times and said she considers the concept of one true love as "dramatic treacle." Do you agree?  I have seen both of these for different people.   I think it just depends on the person.  I do believe it is possible to find that one true love right away and I have personally experienced different love in people with a few toads.  I have also seen friends lose their spouse and find love in another.

5) David Addison was played by Bruce Willis. At the beginning of his career he couldn't support himself as a actor and held down part-time jobs as a security guard, shuttle bus driver and bartender. How many different occupations have you had?  I worked in fast food, grocery cashier, support staff for the mentally handicapped and teacher.  4
6) The Moonlighting theme was co-written and performed by Al Jarreau. While in college, Al planned on being a career counselor. Yet once he began performing with a jazz trio, he knew that music was where his heart was. Tell us about a time you found joy from an unexpected source.  I am sure there are many things and I just can't think, so I am going to go with last summer when Josh handed me a copy of All Girl Filling Station Reunion by Fannie Flagg.  I wanted to try being a reader again and I am so glad I did.  It has been a great past time for me.  I was not expecting to love it so much.

7) Moonlighting was created by Glenn Gordon Caron. ABC gave him the opportunity based on his work on Remington Steele and Taxi. Of these three shows -- Moonlighting, Remington Steele and Taxi -- which would you prefer to binge watch?  I really am not sure.  I would have to see one episode of each to decide that.
8) In 1985, the year Moonlighting premiered, Coca Cola introduced The New Coke. It was not successful and disappeared from store shelves quickly. What's the most recent beverage you drank?  Pepsi

9) Random question  -- Each day, do you put more time into improving your mind or your appearance?  mind