Saturday 9- Papa, Can You Hear Me?

Papa, Can You Hear Me? 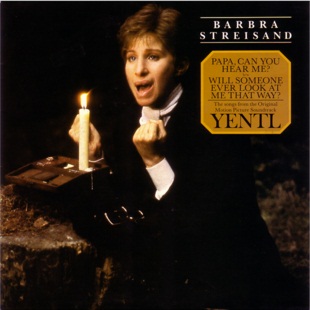 This song was chosen in honor of Father's Day. Hear it here.

1) The song begins with a prayer to "God, our Heavenly Father." Do you often pray?

I pray every day.  Sometimes multiple times a day.


2) This song is from the movie Yentl. Set in the early 1900s, it tells the story of a Polish girl determined to receive a religious education, even though the custom of the day banned girls from studying the Talmud. What subject do you wish you knew more about? I like to learn about everything, but I will go with history.  The older I get the more I realize I do not know a lot of things.

3) It took Streisand more than 15 years to get Yentl made. Studios initially rejected the project, telling her that audiences no longer want to see musicals. Then, because it centered on Judaism, she was told it was "too ethnic." But Yentl was a success at the box office, becoming one of the most profitable movies of the year -- and since Barbra was producer, director and star, she enjoyed those profits. Tell us about a time you're glad you stuck with something.  When I first started working in education, I took a job as a paraprofessional.  I loved it, but it does not pay very good.  The summer after my para job, I applied with the department of mental health for a social worker job...which is my first college degree.  I was offered a position at the DMH, but when I asked for a reference for that job from my job at the preschool, my boss at my job offered me a teaching job if I would go back to college and get my education degree.  I did and I am glad I stuck with that.  I love working in education.  I think the social work job would have been stressful and lots of driving.  I was able to have the same hours as Josh and summer off.

4) The movie, and this song, were so popular that they earned a parody on The Simpsons. (See it here.)  That video has had more than 250,000 views. Before the Yentl parody, what's the last YouTube video you watched?  I went to a make-up party last week and ordered some make-up, so I was watching some videos on Seint Beauty and how to apply their make-up.

6) Sam's own father wasn't an educator, but he is crazy about the local library. He's there so much the librarians greet him by name. Do you have a library card?  Oh yes!  I took Josh to get his card when he was 5 years old too.  We spend a lot of time at the library.

7) For family barbecues, Sam's dad proudly dons his "Kiss the Chef" apron and mans the Weber. What's the last thing you cooked on the grill?  hamburgers and hotdogs.

8) He takes his grilling very seriously and jealously guards his marinade recipe. Do you have a recipe you're willing to share this morning?  not really

9) Sam's father hates it when his daughter swears. What's the latest curse word you used? (It's OK, we don't blush easily.)  I try not to curse, but I occasionally say something if I hurt myself.