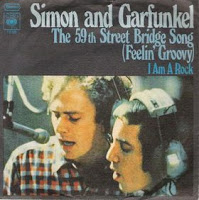 Unfamiliar with this week's tune? Hear it here.
1) The bridge that inspired this song is The Queensboro Bridge in New York City. Are you near a bridge right now as you answer these 9 questions?  There is one about 5 miles up the road, but it is a small bridge.  There is a larger bridge down by where I work, which is more like 30 miles away.

2) Paul Simon says he "loathes" this song and only performs it because fans want to hear it. What's your favorite Paul Simon song? The Sound of Silence and Mrs. Robinson.

3) "Groovy" is such a 1960s word. What common word/phrase from 2020 do you predict will sound just as silly and quaint some day?  There are so many...most do not catch on with me, but some you might hear me say are "that is fire" ,"lit", "on point"...some I have heard Josh say "Ok, boomer" and "throw shade".  I think all of those will go away.  There are also so many covid words I wish would go away too.  I was sick of "the new normal" the first time I heard it.

4) Paul is a lifelong Yankees fan and was thrilled to meet his all-time idol, Joe DiMaggio. Mr. DiMaggio was, at first, less than thrilled to meet Paul because he thought the song "Mrs. Robinson" made fun of him. Once Simon convinced him it was an homage, the men got along fine. Do you have a celebrity encounter to tell us about?  I met Stan Musial (St. Louis Cardinal).  I have told that story on here, but we went to see him get put into the Missouri Hall of Fame and Josh was like 8 years old.  We were too late to get his autograph and meet him.  I cannot remember why, but I was so sad.  After it was all over we were waving bye to him.  He was waiting for his wife by his beautiful Cardinal red car.  He saw Josh and waved us over.  We had a one on one with Mr. Stan Musial.  I asked him if I could take his picture with Josh and he said "yes".  I took their picture and he handed me a stack of his autographed baseball cards and told me to "make sure all of the kids get one of these".  It was a day I will never forget.  He was such a generous man.  Josh did not and still does not realize what a big deal this moment was.  I just wish Karl would have spoken to him.  Karl is such a huge fan.  He did not want to bother him. 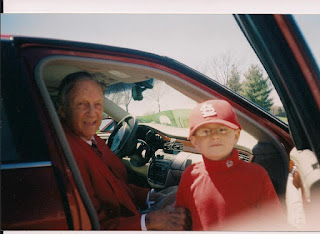 5) Art Garfunkle was the other half of Simon and Garfunkle. Art and Paul met in sixth grade, when were both in a school production of Alice in Wonderland. Tell us about one of your school theatrical appearances.  I was not in drama.  I did play Susie Snowflake when I was in 4th grade or so.  I sang a solo.  I had a really cool dress too.

6) "Artie" used to love needling Paul about his height -- or lack thereof. He maintained he was trying to be funny, but Paul thought is was mean and says the constant digs hurt. Is there anyone in your life who similarly enjoys teasing?  Karl's family is like that.  I think they figured out that I do not think they are funny.  They stopped their comments to me.

7) Paul told NPR that his impulse to write new music has always come "in bursts." He'll go years without composing, and then he'll write every day for months. Do you often feel creative?  not anymore.  I was most creative when I was younger.  I wrote stories and poetry.  I only write lesson plans now.  I do try to be creative with lessons though so the kids have fun.  I guess I do try to still be creative afterall.

8) In 1966, when this song was popular, First Daughter Luci Johnson married Patrick Nugent. Their reception was held at the East Room of the White House. The couple had an 8 ft. tall wedding cake and when the bride threw her bouquet, it was caught by her sister, Lynda. Sure enough, Lynda married a year later. Tell us about a wedding you attended (or your own).  I do not really enjoy weddings, I am not sure why.  I am not a typical girl.  I did not plan my wedding since I was a little kid.  I was almost scared to get married and settle down.  I had a pretty wedding, but it was planned from scratch with no ideas from magazines or friend weddings.  I would not get married again.  I felt so uncomfortable in that dress.  I would run away and get married in my bare feet on a beach in a destination or something fun like that if I had to do it all over again.  I had a big church wedding with all of my friends and family around me.  I do have great pictures of my family from that day though.  Here is one of me.  My weddings colors were hunter green and peach.  We attend a very large church, so the church was gorgeous.  I have some really pretty pictures of me standing on the stairs in my dress and by pretty windows, but I am sharing this one.  It was in my dressing room. 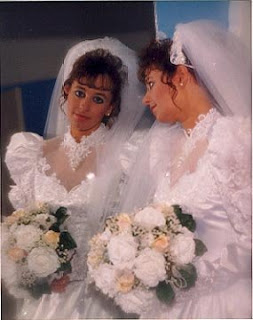 9) Random question: Which do you regret more -- the times you were cautious or the times your were reckless?  I do not have regrets, I am happy for the memories I made whether cautious or reckless.  I had a lot of reckless times in college and I love those memories.  I am very cautious now and I am ok with that too.