Saturday 9: Up on the Roof 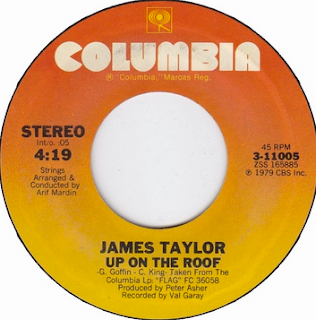 
1) JT sings that, when the world gets him down, he goes up on the roof to find peace. When you're "feeling tired and beat," what do you do to cheer yourself up?  First I just have some alone time and then I go out and do some shopping or eat out, something fun to get my mind off things.  Ya know...sometimes I just take a nap.

2) He sings that, at night, the stars put on a show for free. Are you economizing, or sticking to a budget?  budget

3) In addition to recording this song for his album, Flag, James Taylor surprised the song's composer, and his good friend. Carole King by performing it the night she received her Kennedy Center Honor (see link above). Tell us about a good turn a friend has done for you recently.  I have a pen pal that just sent me a gift package in the mail.  It was just a small gift, but it is always so nice to get something unexpected in the mail.

4) James Taylor and Carole King have been good friends for decades, but they have never been romantically involved. Do you have platonic friends of the opposite sex?  not really.  I did when I was in college, but that was a long time ago.


5) James was born in the Boston hospital where his father worked as a resident physician. Are there any doctors or nurses in your family?  We have a nurse.


6) When James was young, his family moved to Chapel Hill, NC. James has vivid memories of how beautiful the area was in all four seasons. What's your favorite time of year?  Summer, I am off work in the summer, I can enjoy myself and do what I want.  I love to swim and play in the sun and I can get things done in my house.

7) In 1979, when this recording was popular, ESPN launched. Do you often watch that cable sports channel?  no not really, I watch Fox Sports Midwest...they show my St. Louis Cardinals.  I only watch ESPN if they have something I am interested in, which is rarely.

8)  Also in 1979, the Voyager spacecraft sent photos back to earth that revealed Jupiter's rings. Without looking it up, can you name all the planets in our solar system? Mercury, Venus, Earth, Mars, Jupiter, Saturn, Uranus, Neptune, and I still count poor Pluto...how can they just say it is not a planet anymore? #allplanetsmatter #sizediscrimination