Saturday 9- What's Love Got to Do with It? 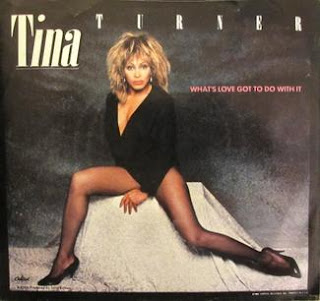 1) The video was shot around New York City in spring. Kids are seen jumping rope. Were you good at jump rope? Has it ever been part of your workout routine as an adult?  Yes, I was good at jumping rope.  I won a blue ribbon at Field Day for being able to jump the longest.  No, I do not jump rope anymore.

2) In real life, Tina Turner played basketball for her school. Were you good at team sports?  I was a cheerleader

3) In the video, Tina Turner wears a little black dress topped with a denim jacket. That jacket is a fashion staple 36 years later. Do you own a denim jacket?  Yes, I do.  I always loved denim jackets.

3) This song was first offered to Cliff Richard, a major pop star in England who never enjoyed gained superstar status in the US. Perhaps, if he had recorded "What's Love Got to Do with It?," he would have been better known on this side of the ocean. Tell us about a time when you said "no" when "yes" might have been the better answer.  I really have no regrets.  I do say no a lot, but I always have a reason.

4) Tina's first marriage, to Ike Turner, was a painful one. Her second marriage, to German music executive Erwin Bach has been far more supportive. This has been a blessing, since Tina has had serious health problems in recent years. Do you have any medical/dental appointments scheduled?  I have a doctor's appointment coming up in November.
5) Tina met Erwin at Heathrow Airport in 1986. He was there to help her prepare for her London performances. They immediately liked one another, but didn't become romantically involved until months later and were surprised to find themselves falling in love. Have you ever had a romantic relationship that crept on you?  Yes.  When I was in college this guy I worked with asked me out on a date.  I was crazy over him after our first date and I never even thought he would ask me out.  We dated for a few years and we broke up.

6) The Rolling Stones' Keith Richards referred to Tina as his "favorite aunt." Is there anyone who isn't a relative of yours by blood but you refer to as aunt, uncle, brother, sister, etc.?  no

7) Former President George W. Bush is also a big Tina Turner fan, and has praised her for having "the most famous legs in show business." What do you believe is your best physical feature?  I get a lot of compliments on my hair and my smile.

8) At home, Tina often doesn't always play music or TV because she appreciates quiet as much as music. What about you? Do you enjoy quiet?  I LOVE the quiet.  I am like Tina and appreciate the quiet as well.